From the Vault: Robert Plant & Alison Krauss at the Mann Center 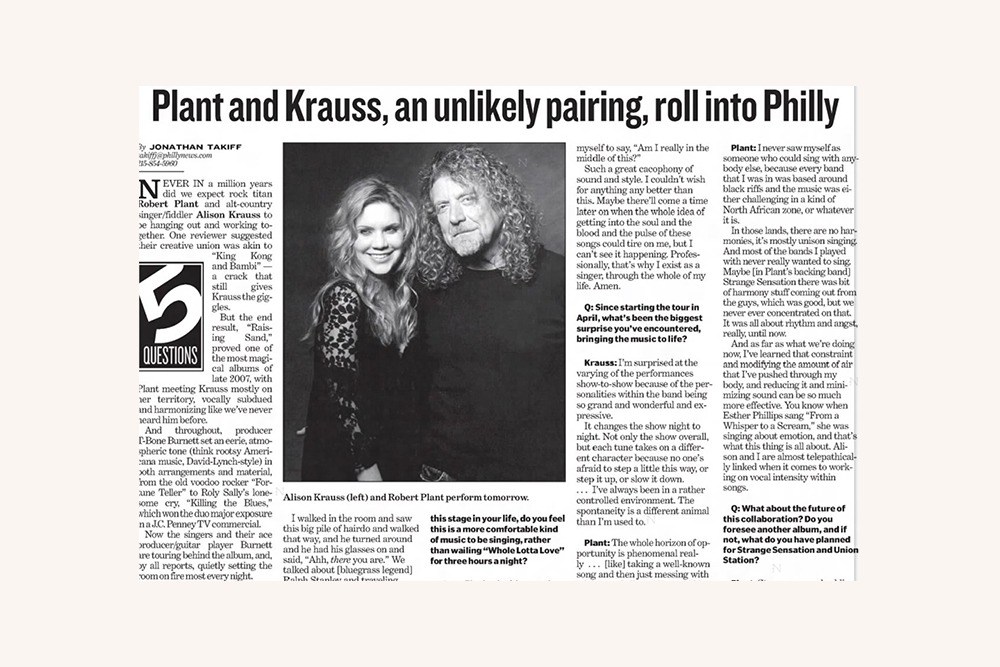 Interview with Alison Krauss and Robert Plant, published in the July 11, 2008, Philadelphia Daily News, in advance of their first performance together at the Mann Center, following release of their best-selling 2007 album, “Raising Sand.” 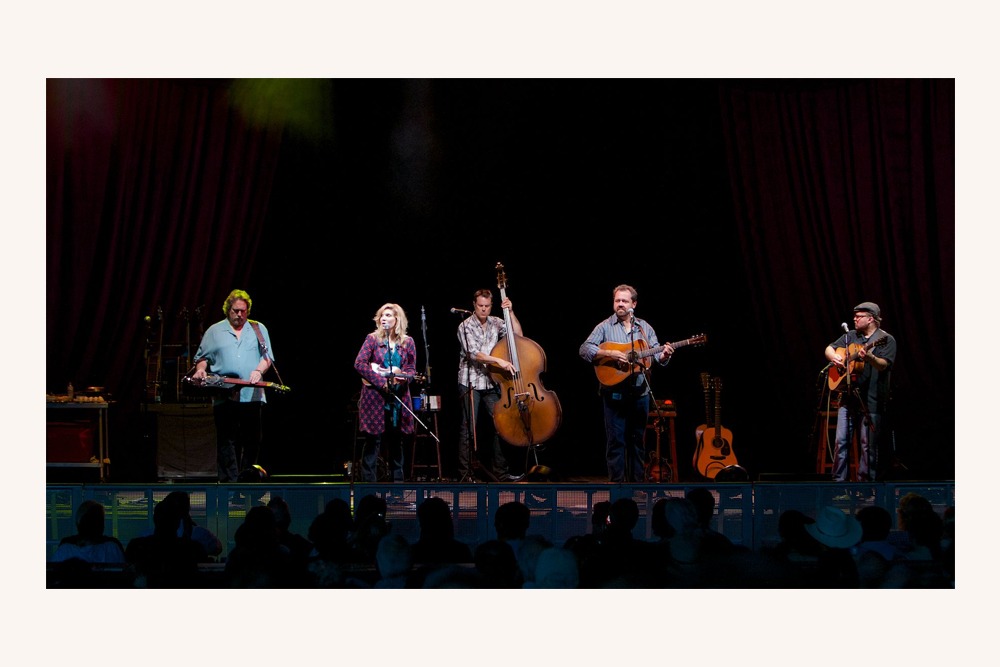 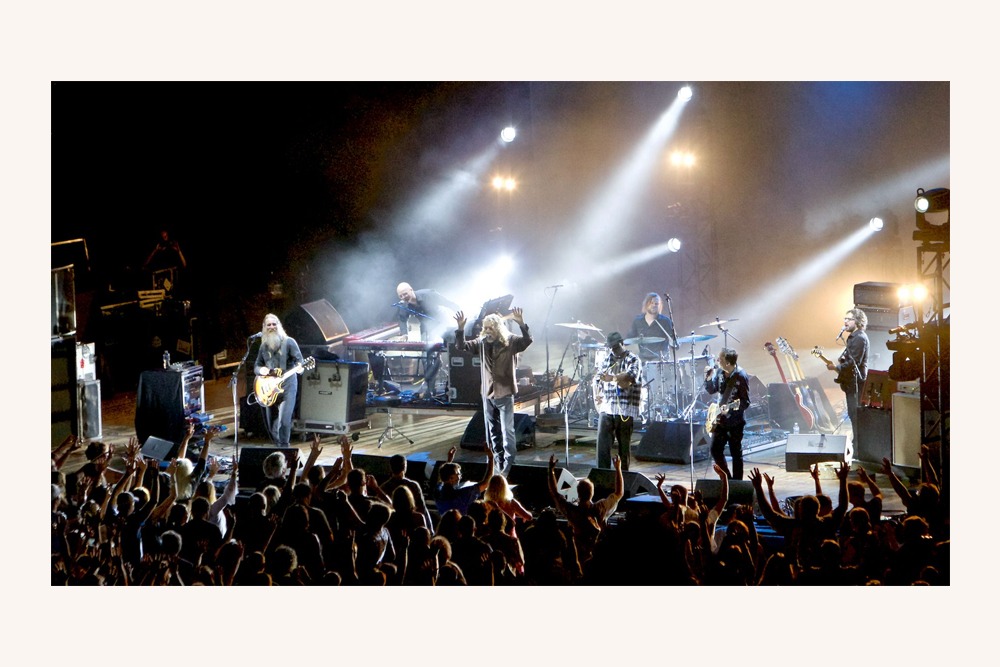 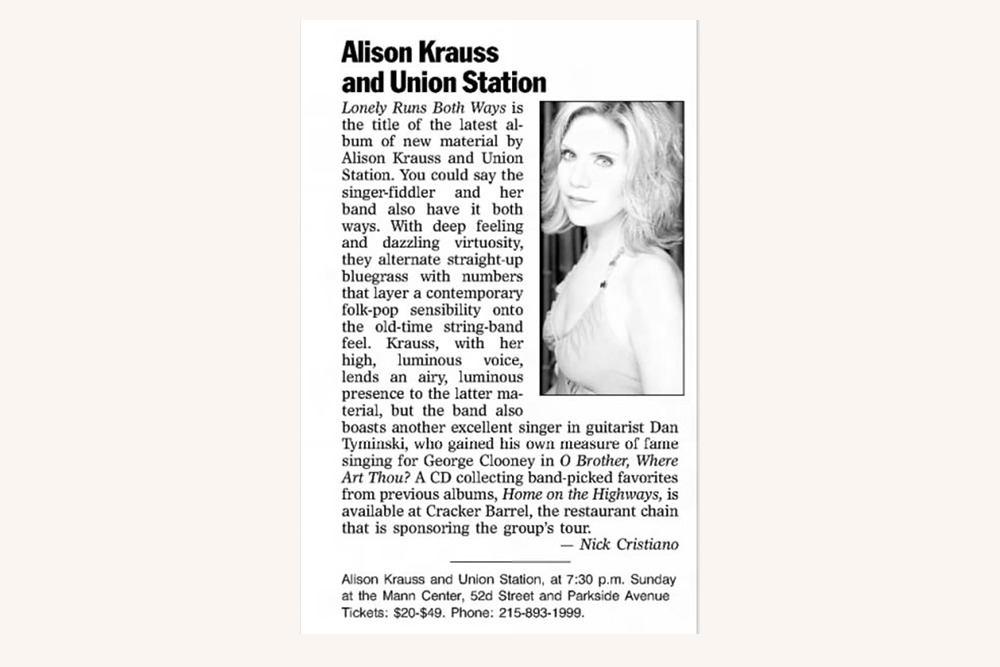 May 20, 2005, Philadelphia Inquirer notice of Alison Krauss’ first show at the Mann Center as a headliner, with her group Union Station. 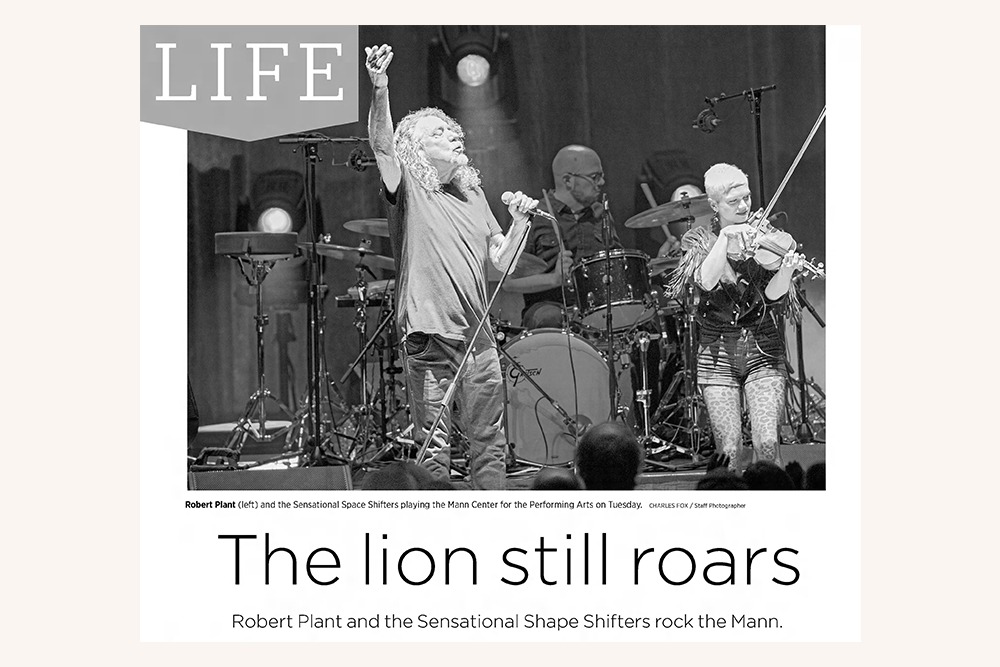 Photograph of Robert Plant and the Sensational Space Shifters in the July 19, 2019, Philadelphia Inquirer, in advance of their second performance as a group at the Mann Center. 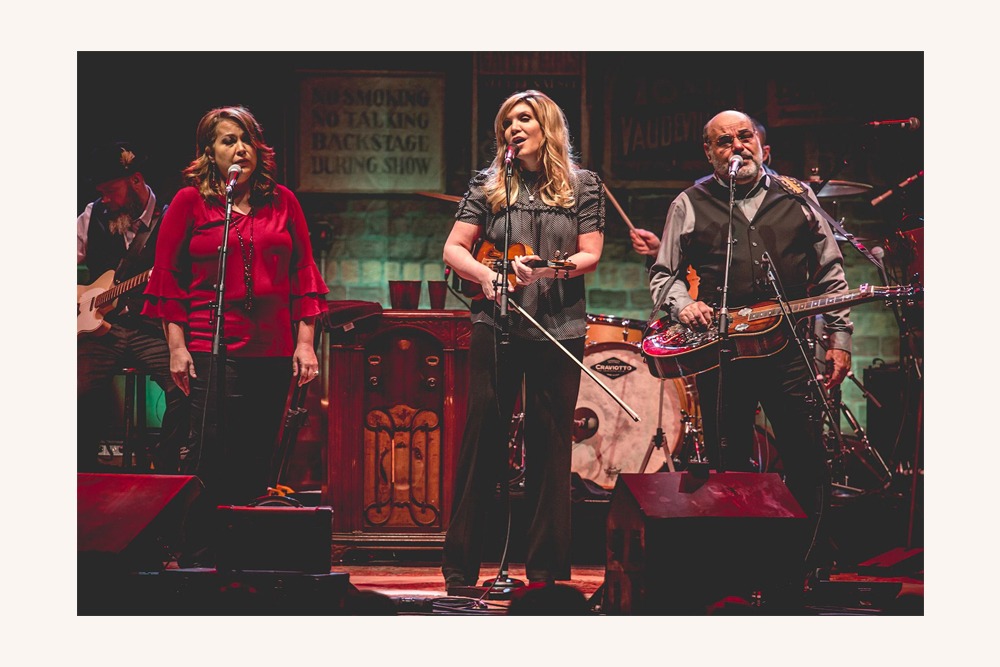 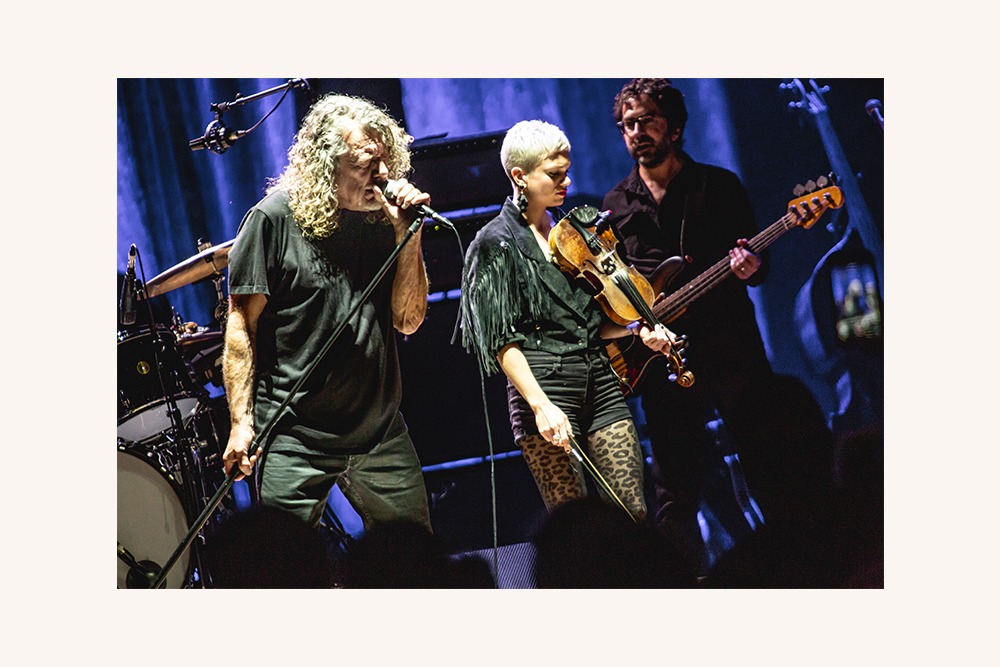 Interview with Alison Krauss and Robert Plant, published in the July 11, 2008, Philadelphia Daily News, in advance of their first performance together at the Mann Center, following release of their best-selling 2007 album, “Raising Sand.”

May 20, 2005, Philadelphia Inquirer notice of Alison Krauss’ first show at the Mann Center as a headliner, with her group Union Station.

Photograph of Robert Plant and the Sensational Space Shifters in the July 19, 2019, Philadelphia Inquirer, in advance of their second performance as a group at the Mann Center.

The Mann Center traces its history to the Robin Hood Dell, which opened in 1930 in East Fairmount Park as a summer home for The Philadelphia Orchestra. In 1976 the organization moved to a new venue in West Fairmount Park. Originally called Robin Hood Dell West, it was later renamed the Mann Music Center in honor of its longtime director and benefactor Fredric Mann, and subsequently renamed the Mann Center for the Performing Arts.

When Robert Plant and Alison Krauss visit the Mann Center on June 12th as part of their “Raising the Roof” tour, it will be the second time they have appeared together at the venue. However, each has performed at the Mann individually or with other groups numerous times over the years.

Robert Plant and Alison Krauss are from widely different backgrounds. Plant, an Englishman born in 1948, is one of the all-time great rock vocalists who came to fame in the late 1960s with the groundbreaking British group Led Zeppelin. Krauss, born in Illinois in 1971, is a superb violinist and vocalist in the bluegrass/Americana tradition who came to prominence as a teenager in the mid-1980s. The two artists first got together in 2007, recording the best-selling, multi-Grammy winning album, “Raising Sand,” with legendary producer T. Bone Burnett. Krauss, Plant, and Burnett, along with a group of top-notch Americana and roots musicians, performed selections from the album at the Mann in 2008. Fourteen years after “Raising Sand,” the three artists teamed up again for a follow-up album, “Raise the Roof,” which was released in 2021 and is the basis of their current tour.

Philadelphia audiences first saw Robert Plant live over fifty years ago, during one of Led Zeppelin’s early US tours in 1969. The group played the Electric Factory, Philadelphia’s premier rock club at the time, as well as the Spectrum, the city’s largest concert venue, the latter appearance part of a three-day Summer Music Festival. Led Zeppelin headlined the Spectrum several times over the course of the 1970s as they grew into one of the biggest groups in rock, propelled by Plant’s powerful vocals and the guitar wizardry of Jimmy Page. After the band broke up in 1980 following the death of drummer John Bonham, Plant continued as a solo artist, but he famously reunited with his Led Zeppelin bandmates for a one-time performance in Philadelphia at Live Aid, the star-studded, multi-act benefit concert held at JFK Stadium on July 13, 1987, with a simultaneous concert at Wembley Stadium in London—all of which was broadcast to a worldwide television audience of some two billion. While Led Zeppelin fans were no doubt thrilled to see the group together again—with Phil Collins on drums, no less—band members considered their hastily arranged, under-rehearsed three-song set a disaster musically.

Later, Robert Plant began delving into Americana—roots music with songs drawn from or inspired by the  great American folk tradition—which led to his collaboration with Alison Krauss. Born in 1971, Krauss began studying violin at age five, won some fiddle contests playing in the bluegrass style, began recording in 1986, and released her debut album in 1987 at age sixteen. Her backup band was Union Station, the string-based bluegrass and country group with which she would perform throughout her career. Krauss’ early appearances in the Philadelphia area were at festivals in the late 1980s, including the Philadelphia Folk Festival and Delaware Bluegrass Festival. Her first appearance at the Mann was in 2002 as part of the “Down from the Mountain” tour, which featured many of the top Americana artists who had performed on the soundtrack to the hit 2000 movie, “O Brother, Where Art Thou?” In 2005 and 2007 Krauss headlined shows at the Mann with Union Station, and then returned in 2008 with Robert Plant and T. Bone Burnett, following release of “Raising Sand.”

Since then, Krauss and Plant have each appeared separately at the Mann several times. Krauss and Union Station were part of the Willie Nelson & Family tour in 2014 (which also featured then rising star Kacey Musgraves), while Plant headlined the following year with his group, the Sensational Space Shifters. Krauss co-headlined with British singer-songwriter David Gray in 2017 and in 2019 was part of the Outlaw Music Festival with Willie Nelson and Bonnie Raitt (who also has a long history at the Mann, where she will be performing June 15th). Four days after the Outlaw Music Festival, Plant and the Sensational Space Shifters co-headlined with roots and blues group Nathaniel Rateliff and the Night Sweats.

To be sure, Robert Plant and Alison Krauss will be bringing many years of memories of playing at the Mann when they return on June 12th.