From the Vault: Leopold Stokowski at the Robin Hood Dell 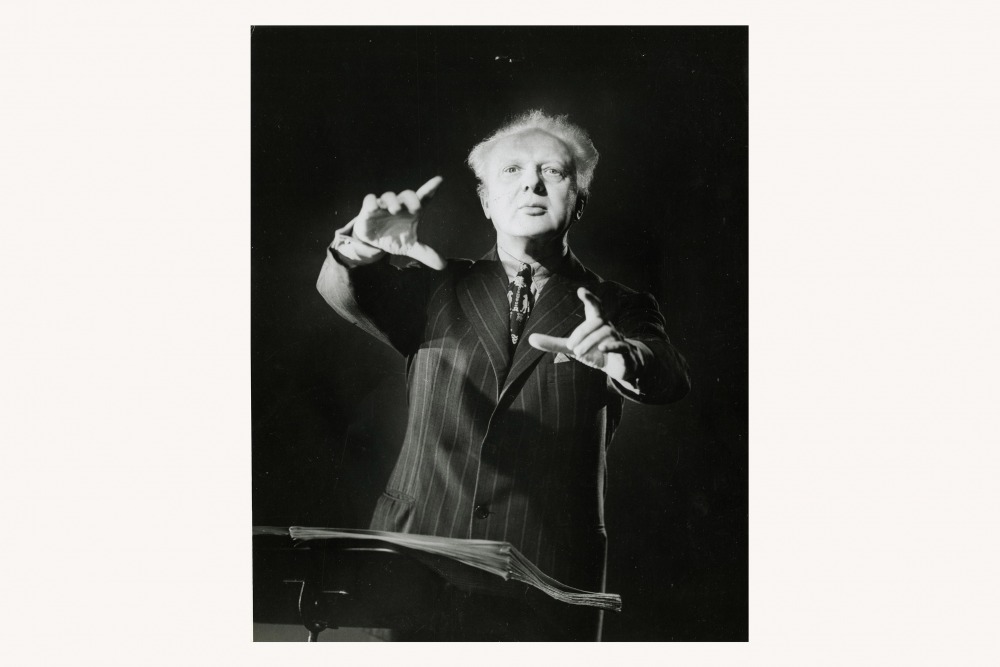 Philadelphia Record, May 18, 1930, reporting on progress on construction of the Robin Hood Dell. 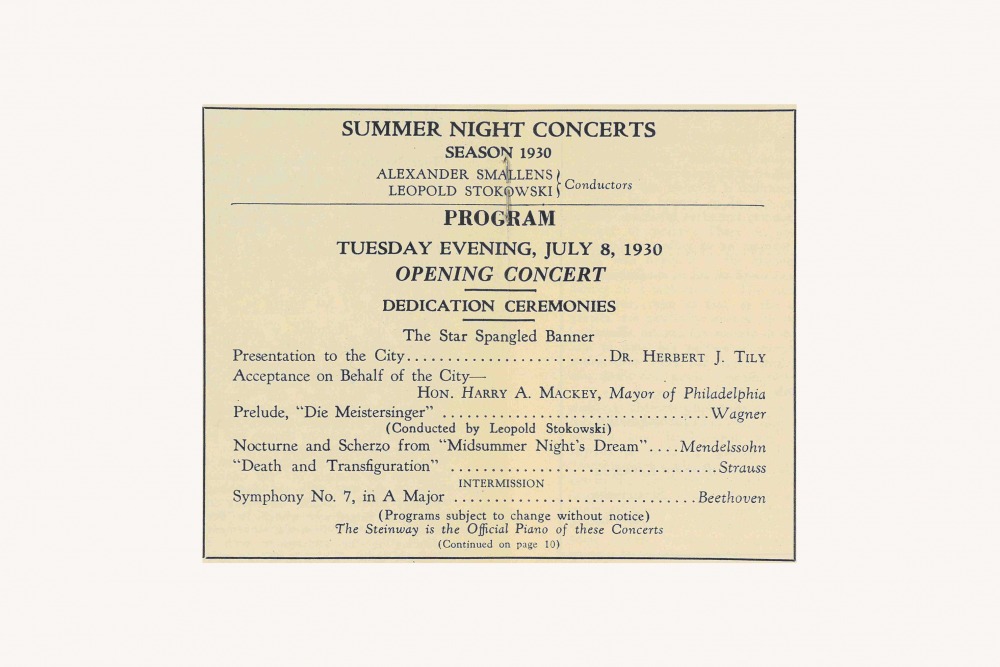 Program for inaugural Robin Hood Dell concert, July 8, 1930. Stokowski was scheduled to conduct the opening piece, but had to cancel at the last minute due to a family illness. Alexander Smallens conducted the entire concert. 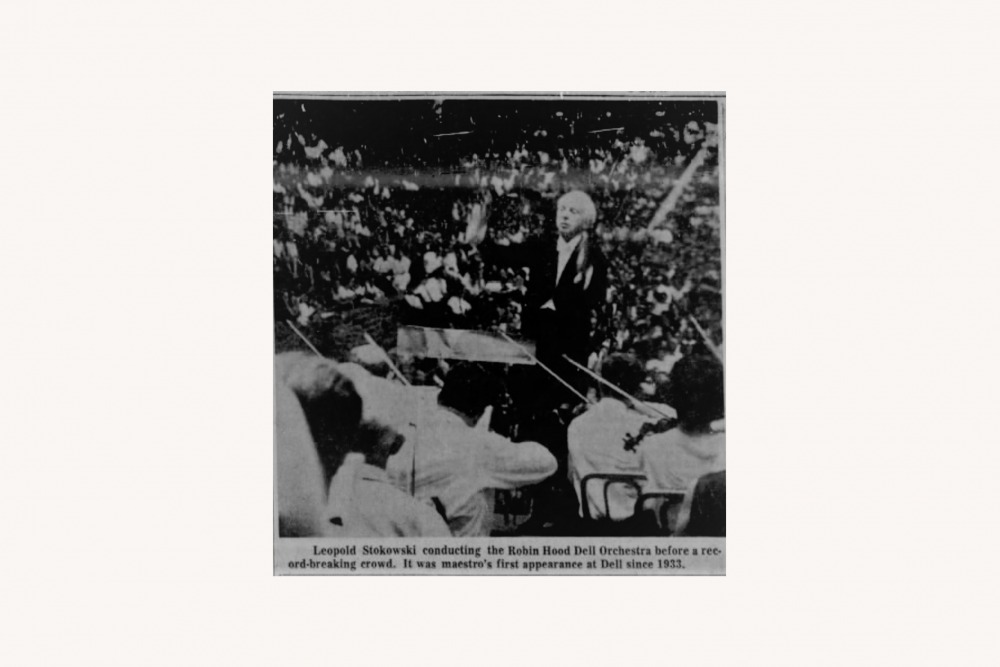 Philadelphia Inquirer, July 22, 1960, depicting Stokowski conducting at the Robin Hood Dell on July 21st, his first appearance at the Dell since 1933.

Philadelphia Record, May 18, 1930, reporting on progress on construction of the Robin Hood Dell.

Program for inaugural Robin Hood Dell concert, July 8, 1930. Stokowski was scheduled to conduct the opening piece, but had to cancel at the last minute due to a family illness. Alexander Smallens conducted the entire concert.

Philadelphia Inquirer, July 22, 1960, depicting Stokowski conducting at the Robin Hood Dell on July 21st, his first appearance at the Dell since 1933.

Leopold Stokowski, the innovative, charismatic conductor of The Philadelphia Orchestra from 1912 to 1941, had a small but helpful role in founding the Robin Hood Dell in 1930, publicly championing establishment of the venue as a summer home for the Orchestra and offering advice on its design in the planning stages. At the time, Stokowski was an internationally renowned conductor, having built The Philadelphia Orchestra into one of the world’s greatest symphonic ensembles. He was scheduled to conduct the opening piece in the Dell’s inaugural concert on July 8, 1930—the Prelude to Richard Wagner’s opera Die Meistersinger—but had to cancel at the last minute due to a family illness. The Orchestra’s assistant conductor Alexander Smallens, who served as the Dell’s music director in the early years and was slated to conduct the rest of the inaugural program, led the first piece instead.

Stokowski generally did not spend the summer months in Philadelphia—he was usually either in Europe or New England—and was never scheduled to conduct a Dell concert during his tenure with The Philadelphia Orchestra. However, he did make two unscheduled appearances at the venue, in 1931 and 1933. Stokowski was in Philadelphia in July of 1931 to lead The Philadelphia Orchestra in a recording session at the Academy of Music. On the evening of July 15th he came to hear a concert at the Dell for the first time. Alexander Smallens was again the conductor and at the opening of the second half of the program Smallens invited Stokowski to the stage to conduct the Prelude and Liebestod from Wagner’s opera Tristan und Isolde. As the Philadelphia Inquirer noted, “clad informally in grey, Mr. Stokowski mounted the conductor’s stand and made the concert a memorable and exciting one by conducting the orchestra with soaring, passionate beauty.” After the piece, Stokowski told the audience that it was “wonderful to sit in the very last seat where I [had] been sitting and hear perfectly.”

Stokowski made another unscheduled appearance at the Dell two years later, on July 20, 1933, this time to conduct a piece in memory of Alexander Van Rensselaer, the founding and longtime president of The Philadelphia Orchestra, who had died two days earlier. Stokowski and Van Rensselaer were close and Stokowski made a special trip from his summer home in Connecticut to conduct the Siegfried Funeral March from Wagner’s opera Gotterdammerung in honor of his friend. He spoke briefly about Van Rensselaer from the stage, then led a performance that the Inquirer described as “exultant in its anguish, savage in its sorrow, masterful in its mourning, barbaric in its beauty, and cosmic in quality. The tremendous music was vitalized afresh as Stokowski’s profile was sharply silhouetted against the lighted background of the music shell in the Dell, while the Orchestra responded fervently to his dramatic and dynamic direction. At the end, he made no attempt to suppress the spontaneous applause, but bowed once and departed.”

Following that moving 1933 performance, Stokowski did not return to the Robin Hood Dell for almost thirty years. In the mid-1930s, his relationship with The Philadelphia Orchestra’s board of directors deteriorated and he resigned his position as music director, although he continued to conduct the Orchestra for several years. In 1936 the board hired Eugene Ormandy and the two men shared conducting duties for the next several years, with Stokowski appearing in Philadelphia less and less until leaving for good in 1941. After a nineteen-year absence, Ormandy invited Stokowski back to Philadelphia to guest conduct the Orchestra. The two series of Stokowski/Philadelphia Orchestra concerts at the Academy of Music in February 1960 were milestone events for the conductor, the Orchestra, and Philadelphia audiences.

That summer Stokowski gave his first complete regularly scheduled concert at the Dell, leading the Dell Orchestra on July 21, 1960 in a program of Berlioz, Debussy, Ravel, Shostakovich, and Azerbaijani composer Fikret Amirov. Under the headline “31,000 Acclaim Stokowski,” the Philadelphia Inquirer noted that “an inspired Dell Orchestra (of whom almost one third had played under Stokowski in bygone decades) outdid itself in sheer glitter, virtuosity and splendor.” Stokowski returned to conduct at the Dell three more times, in 1961, 1963, and 1965. He continued to guest conduct The Philadelphia Orchestra occasionally at the Academy of Music and other venues until 1969. He died in England in 1977 at age ninety-five.