From the Vault: Luciano Pavarotti at the Mann Center 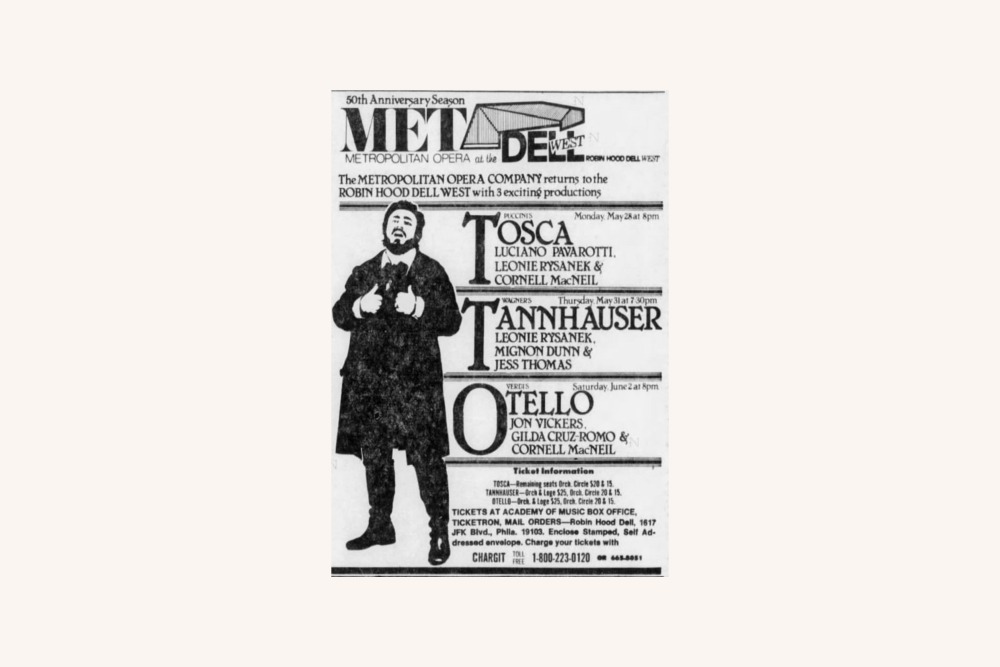 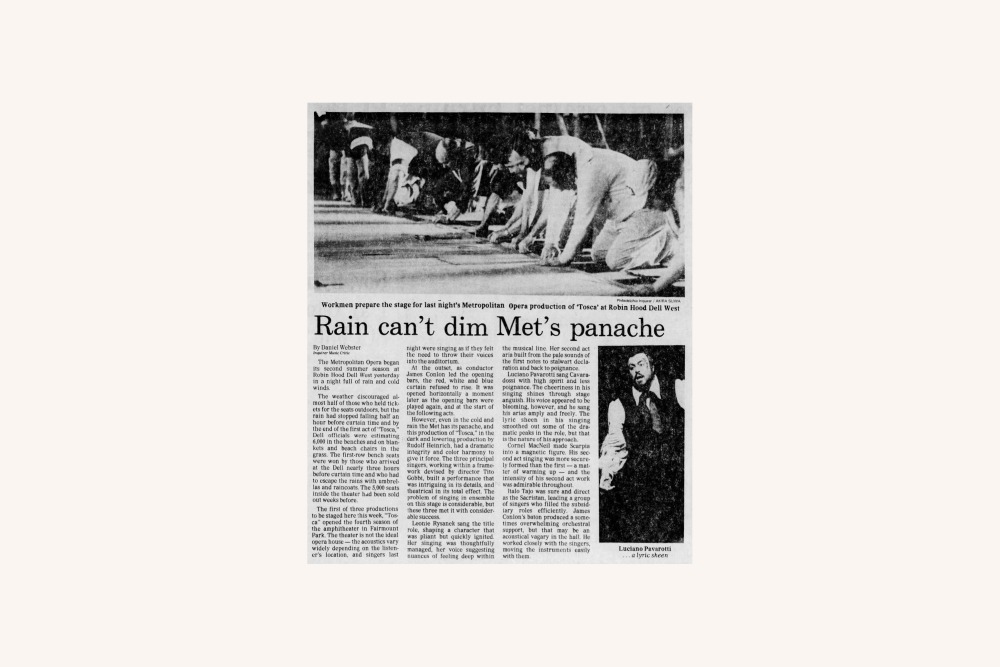 May 29, 1979 Philadelphia Inquirer report on the previous evening’s Metropolitan Opera Company performance at Robin Hood Dell West. Although marred by poor weather, the concert was considered an artistic success. 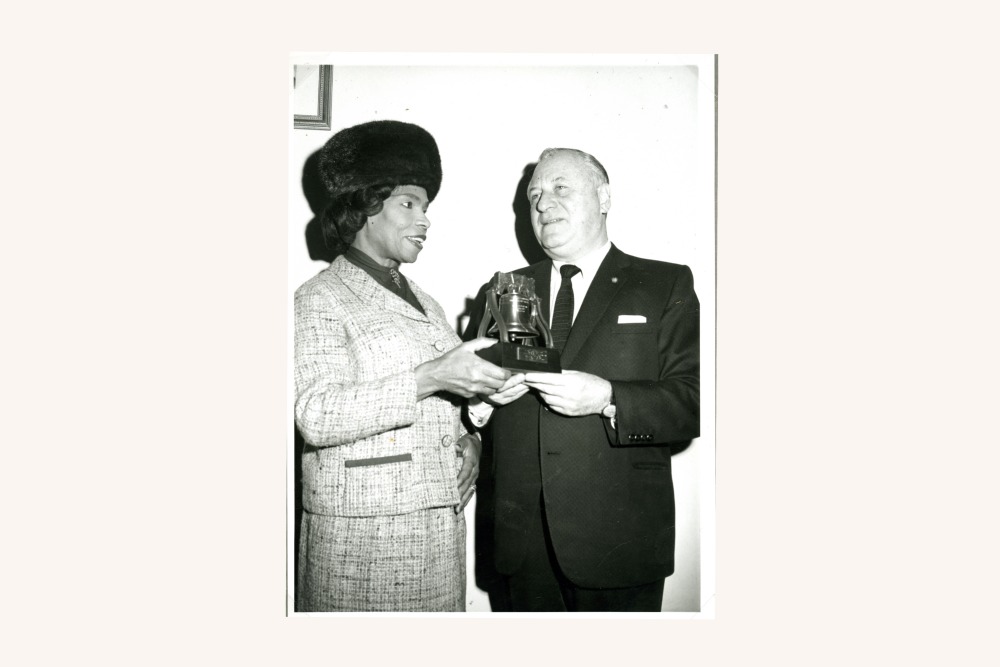 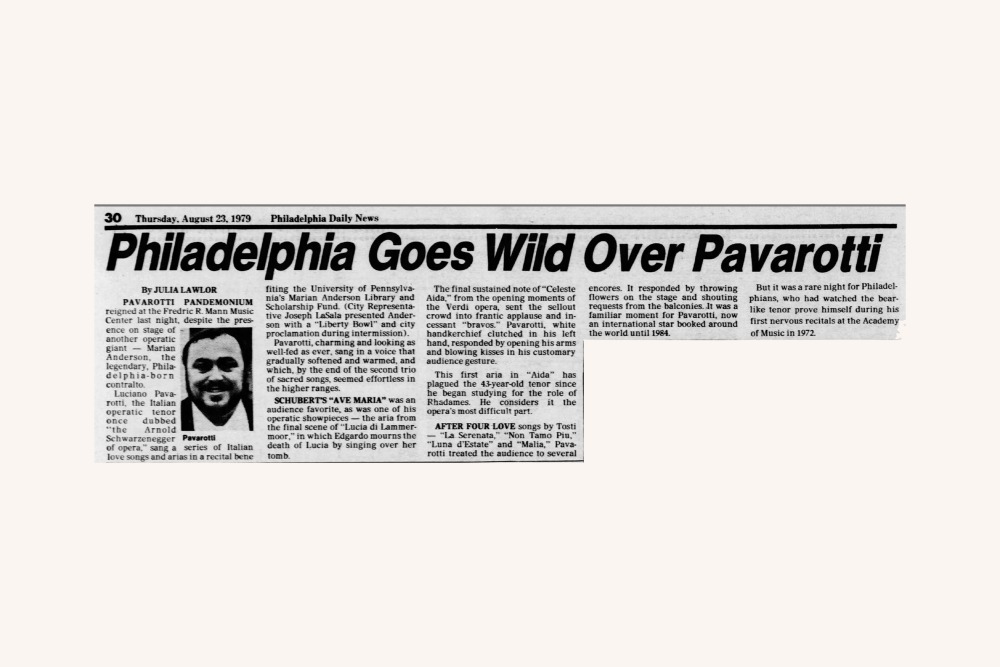 May 29, 1979 Philadelphia Inquirer report on the previous evening’s Metropolitan Opera Company performance at Robin Hood Dell West. Although marred by poor weather, the concert was considered an artistic success.

The great Italian tenor Luciano Pavarotti appeared at the Mann Center just twice, both times in 1979. In May of that year he performed with the Metropolitan Opera Company and in August he gave a solo recital in a benefit concert for the Marian Anderson Library and Scholarship Fund. The latter event brought two of the greatest singers of the twentieth century together at the Mann.

Born in Italy in 1935, Luciano Pavarotti rose to fame in the 1960s and by the late 1970s was a superstar. A larger-than-life figure with a phenomenal voice and ebullient personality, Pavarotti performed all over the world but developed a particularly close relationship with Philadelphia. The Luciano Pavarotti International Voice Competition, based in Philadelphia and staged periodically from 1981 to 1996—most of those years under the auspices of the Opera Company of Philadelphia—made the city an important center for opera. Pavarotti performed often in Philadelphia beginning in the early 1970s, as a recital soloist, in Opera Company of Philadelphia productions, in concerts with The Philadelphia Orchestra, and with New York City’s Metropolitan Opera Company. It was in the latter capacity that he made his debut at the Mann Center, then still called Robin Hood Dell West, on May 28, 1979.

The Metropolitan Opera Company had been staging operas in Philadelphia since the 1880s; indeed, “the Met,” the recently renovated concert hall on North Broad Street in North Philadelphia, takes its name from the Metropolitan Opera Company’s purchase of the building in 1910 to serve as a venue for its frequent performances in the city. The company produced operas often in Philadelphia throughout the twentieth century, and many of its singers were guest artists at the Robin Hood Dell over the years, but the company itself did not stage full opera performances at the Dell—either the original location in East Fairmount Park or the new venue in West Fairmount Park—until June 1978. Its series of three operas presented on June 1, 2, and 3, 1978, were the first opera productions at the three-year-old Robin Hood Dell West. Despite some technical difficulties, the productions were generally well-received and the company returned to the Dell the following year for another series of three operas in late May/early June 1979. The first of these productions, Giacomo Puccini’s Tosca on May 28th, featured Luciano Pavarotti in his Dell debut. Unfortunately, it was a cold rainy evening and there were many no-shows. Those who did attend were treated to a top-notch production and excellent vocal performances, according to the critics.

Two months later Pavarotti was back at the Dell, which had recently been renamed the Mann Music Center, in a benefit concert for the Marian Anderson Library and Scholarship Fund. Anderson, the world-renowned contralto and Philadelphia native, had donated her personal papers, recordings, and memorabilia to the University of Pennsylvania, which undertook a fundraising campaign to establish a library and scholarship in her name. As part of a citywide celebration, August 22, 1979 was designated “Marian Anderson Day” in Philadelphia, with various festivities, culminating in the Pavarotti recital at the Mann that evening. Accompanied by piano, Pavarotti sang Italian arias and Latin religious songs, the latter including one of Anderson’s signature pieces, Franz Schurbert’s “Ave Maria.” The audience response and critical reviews of Pavarotti’s performance were glowing: “Philadelphia Goes Wild Over Pavarotti” ran the headline in the Daily News, while the Inquirer noted that the “world’s biggest box office tenor … sang, as is his custom, seemingly without effort, the golden tones flowing in the middle and especially the upper range.”

Miss Anderson, then eighty-two years old and long since retired from singing, was in attendance and received accolades at the concert from Mann Center president Frederic Mann, University of Pennsylvania president Martin Myerson, and Philadelphia City Representative Joseph LaSala. Then, according to the Inquirer, “the world-honored and world-famous contralto replied with a modest and affectionate impromptu speech.” She told the audience that “this is one of the great, great moments of my life.”

The 1979 season was the fiftieth anniversary of the Robin Hood Dell/Mann Center and the appearance of Marian Anderson and Luciano Pavarotti, two of the greatest voices of the twentieth century, on the Mann stage the evening of August 22nd was certainly a high point in the venue’s storied history.