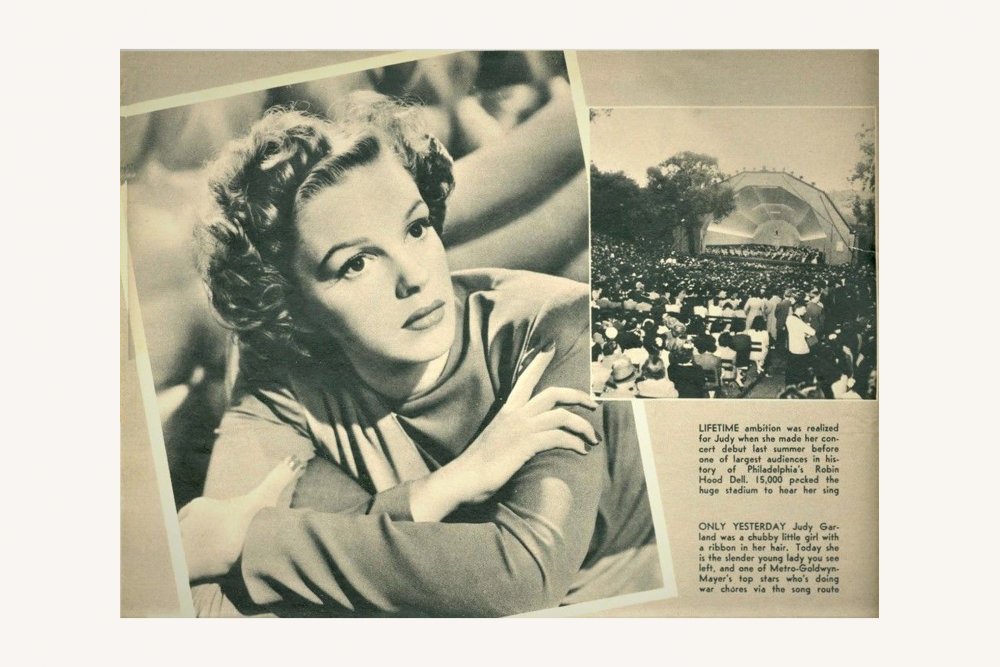 Excerpt from November 1943 issue of Radio & Movie Guide, reporting on Judy Garland’s appearance at the Robin Hood Dell the past summer. Mann Center for the Performing Arts Archives. 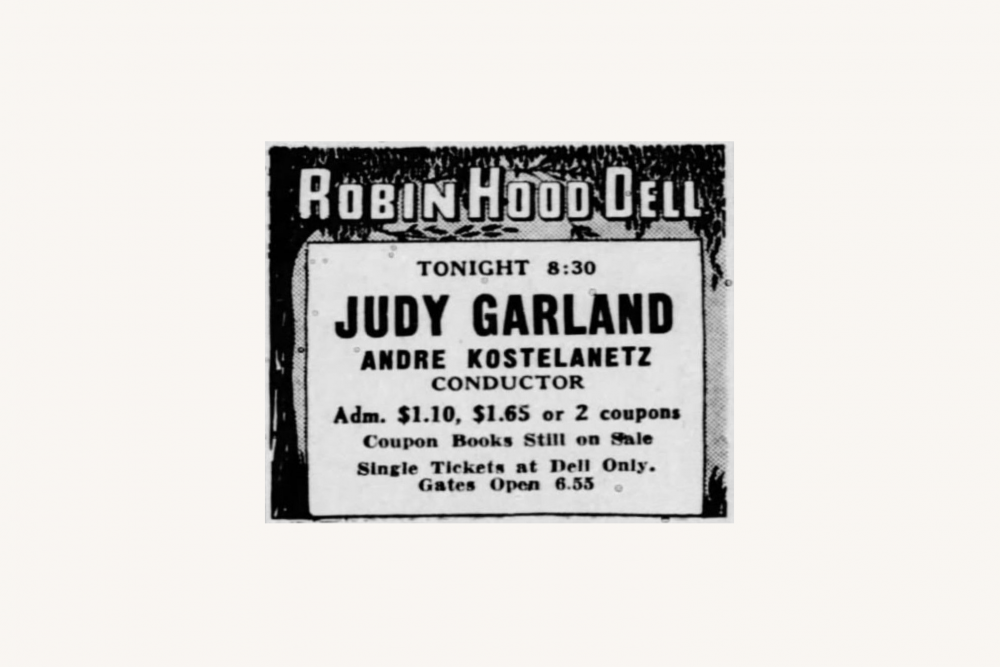 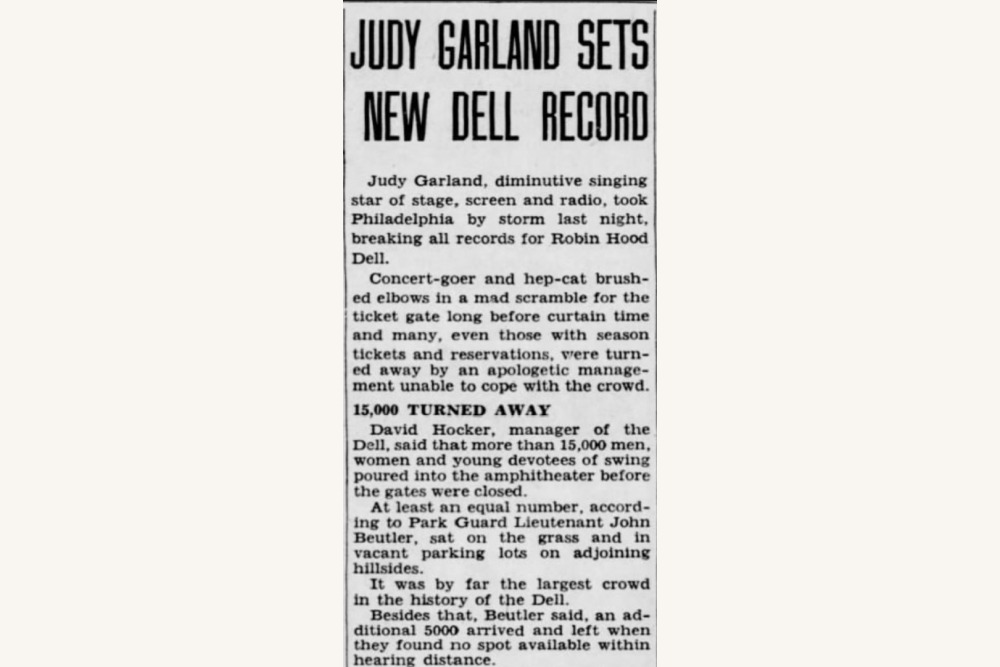 Excerpt from November 1943 issue of Radio & Movie Guide, reporting on Judy Garland’s appearance at the Robin Hood Dell the past summer. Mann Center for the Performing Arts Archives.

In July of 1943 Judy Garland had just turned twenty-one years old and was already a major star as well as a longtime veteran of stage and screen. Born in 1922 into a show business family, she began performing in vaudeville as a child and in the late 1930s made a number of very successful movie musicals, including the iconic Wizard of Oz and a series of films with fellow teenage star Mickey Rooney. One thing the talented singer/dancer/actress had not done, however, was give a solo concert. That changed on July 10, 1943, when she was featured artist at the Robin Hood Dell, with popular conductor Andre Kostelanetz leading the Robin Hood Dell Orchestra.

Garland’s star power was such that the concert drew a record crowd to the Dell. As the Philadelphia Inquirer reported the next day, the line started forming at the gates three and half hours before showtime, “by trolley and foot they came, the ant-like lines increasing every minute.” The final totals were some 15,000 ticket-buying attendees, perhaps an equal number listening on the hillsides outside the gates, and some 5,000 who left when they couldn’t find spots close enough.

As was customary in Dell concerts with popular singers, the program included a mix of symphonic pieces by the Robin Hood Dell Orchestra and songs by the featured artist with orchestral accompaniment. In the first half of the program Andre Kostelanetz led the Orchestra in selections from Hector Berlioz’s Damnation of Faust and Johann Strauss’ Emperor Waltz, followed by a medley of George and Ira Gershwin songs by Garland. The second half featured a symphonic arrangement of music from Gershwin’s opera, Porgy and Bess, by composer/arranger Robert Russell Bennett, followed by a medley of songs Garland had made famous in her movies, including, of course, “Over the Rainbow” from the Wizard of Oz. As the Inquirer reviewer noted, Garland had some nerves initially, but the positive response from audience gave her confidence:

Frankly nervous at the beginning … the songstress gradually warmed to her stint, and the enthusiastic reception accorded that opening group [of Gershwin songs] must have removed her expressed fears that the audience wouldn’t like her singing… Things got better as they went along, but in Gershwin’s “Strike Up the Band” Miss Garland really injected all that personality which has made her a leading screen songstress.

By the final number of the concert—a spirited version of “The Joint is Really Jumpin’ Down at Carnegie Hall,” which she sang in the about-to-be-released movie, Thousands Cheer—Garland was apparently fully in command:

Judy really cut loose here, and apparently enjoyed it as much as the audience, for she said, “I think it would be sorta fun if we did that last number over again.” In the encore, she substituted the words “Robin Hood Dell” once for “Carnegie Hall.”

Judy Garland went on to have a successful career as a concert artist in the years that followed. Her life was relatively short and troubled—she died of barbiturate overdose in 1969 at age forty-seven—but the concert aspect of her career began on a happy note at Philadelphia’s Robin Hood Dell in 1943.