What’s it like to play together after 16 months solo? For Philly student musicians, ‘a lot of teary moments.’ 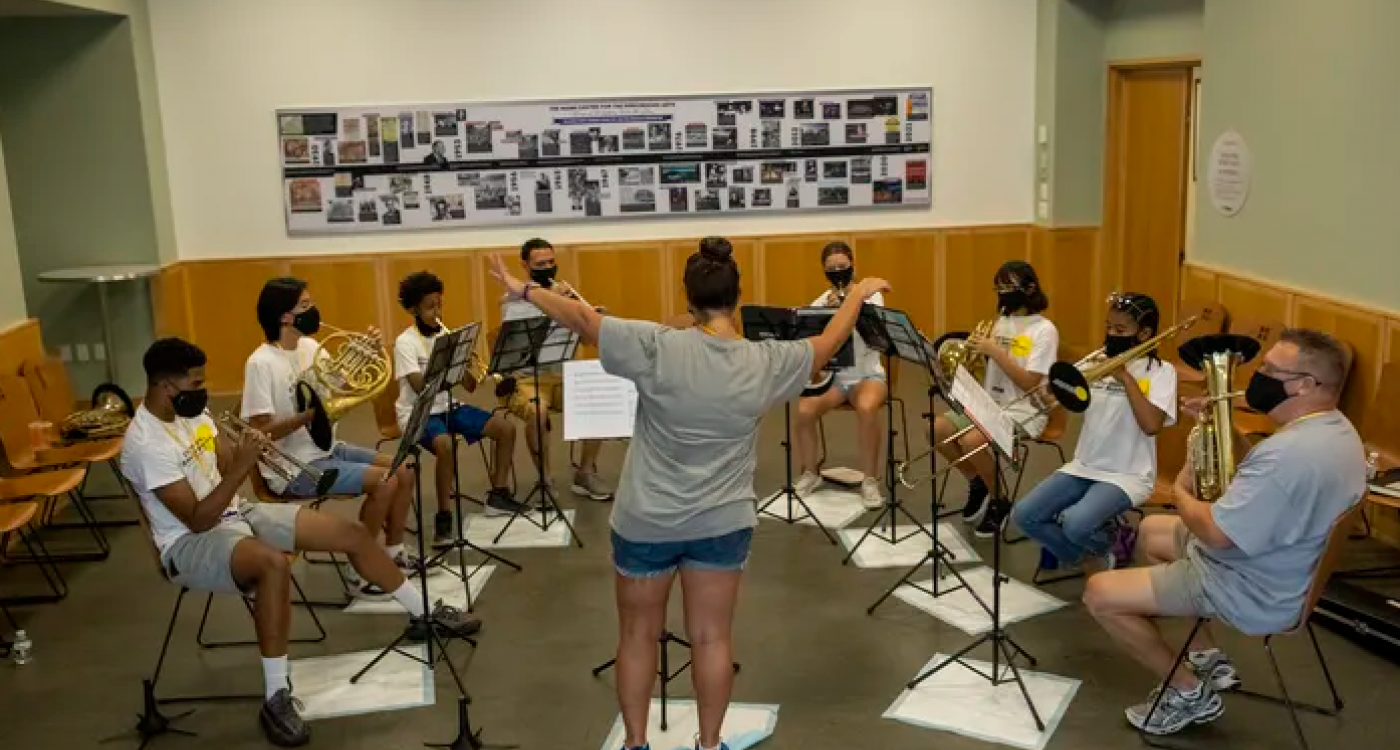 Teacher Sabrina Huber conducts the brass chamber ensemble during the All-City Orchestra Summer Academy at the Mann Center for the Performing Arts.

“This is what we signed up for: to teach kids, making music together in the same room,” teacher Jacob Hernandez said.

by Kristen A. Graham | The Philadelphia Inquirer

During the months of lockdown, the world narrowed for Philadelphia teenager Kevin Collins — school was online, friends and teacher were distant. But music was a constant.

Collins, 17, a rising senior at Fels High School, already played the saxophone, violin, piano, cello, bass, and guitar before COVID-19 struck. He used the time at home to teach himself flute, graduating from scales to ambitious, full-blown pieces.

But until this week, he had never played the instrument other than in a room by himself.

Collins and dozens of other Philadelphia student musicians performed in person for the first time in 16 months over a few days this week, joining the All-City Orchestra Summer Academy for an intense stretch of performances, composition, and master classes at the Mann Center for the Performing Arts. It felt, Collins said, surreal — and wonderful.

“It’s just so different, feeling the music, seeing everyone’s reactions to it,” he said. “It’s great.”

The camp, sponsored by the Philadelphia School District, the Mann Center, the Philadelphia Orchestra, and Project 440, is in its third year after debuting in 2019 and last year’s all-virtual summer. But Frank Machos, the district’s executive director for the Office of the Arts and Creative Learning, said this year feels special.

“There’s been a lot of teary moments,” said Machos — watching teachers introduce themselves to students they had never met in person, the first time seeing everyone on the cavernous stage together.

There are plenty of concessions to the still-present pandemic — special covers fitted to some instruments to limit aerosol transmission, masking for students and teachers, including special protection with mouth openings for those musicians who need them. But at the end of the day, students are still interacting one-on-one with teachers, and that felt like a revelation to both.

Most district students have not set foot inside school buildings since March 2020. The school system opened for two days of in-person instruction for students up to ninth grade in the spring, but pupils in grades 10 through 12 never got the opportunity to return, and of those students who were eligible to come back, 70% opted to remain virtual all year.

Jacob Hernandez teaches students at five district schools how to play brass instruments; many of his pupils had no access to instruments because of the pandemic. He and his players got creative, exploring composition and different styles of music, Hernandez said, but it was still a tough year.

“This is what we signed up for: to teach kids, making music together in the same room,” said Hernandez, who grew up in Philadelphia and flourished in the All-City program as a young musician himself.

Some students are tackling sophisticated concertos, and others are still perfecting playing a few lines of music. The summer academy is a no-barriers program, open to students of all ability levels from district, charter, and private schools, as well as homeschooled children.

Some students arrive having had years of lessons, and others have been making their own way. Collins, for instance, juggles his job at Chipotle with the academy, managing a long train ride and walk through Fairmount Park to make it to class every day.

Midmorning Tuesday, chamber groups were spread around the Mann, working on pieces they would eventually play together.

“Charlie, those are good-sounding crashes,” Liuzzi said after an enthusiastic meeting of student cymbals. Tarantino directed the students to pick up the piece from the top.

After 16 months of playing alone in bedrooms and kitchens — the prospect of a summer week spent playing with peers, in person, was daunting to some students.

But for Bruno Klena, a French horn player, the ensemble experience was a welcome change from playing alone on recordings that teachers would edit. (Playing live over Zoom wasn’t possible, given students’ often-glitchy internet connections.)

“I always felt like I had to get my recordings perfect,” said Klena, a rising 10th grader at GAMP. “Playing at home was a lot more stressful for me.”

Marcel Allen, soon to be a senior at Carver High School of Engineering and Science, is an extrovert, someone who thrived not just on playing trumpet in the school band but on the interactions — “being loud and goofy” — in school hallways and classrooms.

So the summer academy felt like a taste of normalcy, a glimpse at some of the best parts of school in the past and hopefully in the future.

“It was weird to be away so long, but playing together,” said Allen, 16, “it felt just like riding a bike.”

Sydney Vance, a 12-year-old homeschooled percussionist, never had the opportunity to rehearse or perform with an ensemble prior to the COVID-19 lockdown. Now, she said, she’s hooked.

“It’s amazing to hear the vibrations of everyone playing together,” Vance said. “It’s so exhilarating.”

See the full article on The Philadelphia Inquirer's website.