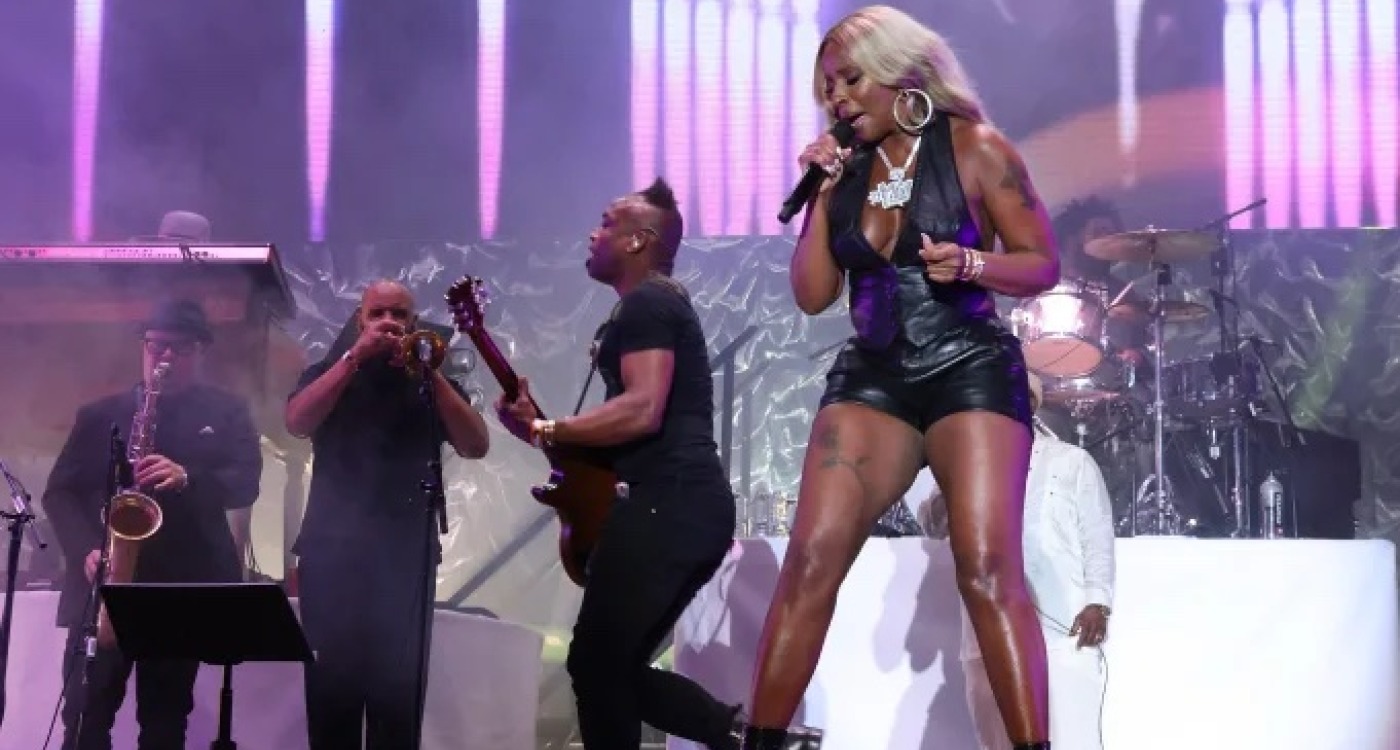 In 2008, on a pier beside Philly’s Delaware River, the Roots started what would become an annual live gathering, the Roots Picnic. The inaugural fest was a one-day affair near the City of Brotherly Love’s downtown, with its greatest highlight being hip-hop’s mightiest live band backing legacy rap and R&B artists such as Snoop Dogg, Erykah Badu and De La Soul, giving each vocalist a raw, inventive new energy. As the first, ongoing, hip hop-artist-curated fest, the Roots Picnic predates J. Cole’s Dreamville in North Carolina, Jay-Z’s Made in America in Philly, H.E.R.’s Cali-based Lights On and anything Travis Scott may do in the future as the blueprint.

Fourteen years later, for 2022’s iteration of the Roots Picnic on Saturday and Sunday, the extended ensemble delivered again — this time, backing the original queen of hip-hop-laced R&B, Mary J. Blige, for night one’s closer  – but much had changed since its start.

That it’s currently held on a lawn, the Mann Center’s bucolic Fairmount Park, gives the now-two-day event a familial picnic vibe. To go with its extended family feel, 2022’s Picnic marked 35 years of collaboration between the Roots’ co-founders, rapper-lyricist Tariq “Black Thought” Trotter and drummer Ahmir “Questlove” Thompson, two men at different stages in their life than when they started. Thank Quest’s directorial debut, “Summer of Soul (…Or, When the Revolution Could Not Be Televised),” and its Oscar documentary victory, and Thought’s work as an actor, virtually (“Waiting for Godot”) and Off Broadway (“Black No More”), for bringing more prestige to the ensemble.

Running through a hypnotic brass-and-reed-driven megamix of instant funk, Manu Dibango and Kool & the Gang riffs gave the Roots immediate command of the crowd. Joining with the back-to-back smooth groove of “Love No Limit (Remix)” and “Mary Jane (All Night Long),” Blige’s soulful, modulating flow wound through the night’s end like a sultry breeze. Saturday’s jam wasn’t the first Picnic where the Roots closed on R&B’s tip (e.g. Erykah Badu), and it shouldn’t be the last, as it set a mood of serenity while elevating its singer to rawer-than-usual heights. Though pitchy during “I’m the Only Woman,” and during an emotive “I Can Love You,” by the time Blige got to a bluesy, holy cover of Rose Royce’s “I’m Going Down,” a frenetic version of “Real Love” and a darting duet with Black Thought, “Reminisce” (after the pair’s peppery “What’s the 411?”), Blige and the Roots were back on track and rode the night to a rump-shaking close.

That the Roots-Blige set came on the heels of Jazmine Sullivan, the best performance of the Picnic, made for one nearly impossible act to follow. The Philadelphia native and 2022 Grammy winner for Best R&B Album for “Heaux Tales” took control of the female-heavy home crowd early with the raging, quiet storm of “Bust Your Windows” and “Put It Down,” and never let go until the last, graceful notes of “Pick Up Your Feelings.” Lusciously lewd when necessary (an expletive-laden “BPW,” with proud lines such as “It’s a privilege to let you hit it”), pleading without clinging (“Hurt Me So Good”), and in command of love’s mess (“Holding You Down (Goin’ In Circles)”), Sullivan was the height of stormy-weather soul. Nuanced, powerful vocals and an intuitive band made even the quietest Sullivan moment – like the Flack-turned-Fugees classic “Killing Me Softly” – epic. If 2023’s Roots Picnic needs a headliner, they need look no further than their Philly backyard.

R&B continued to rule the Picnic on its second night when it came to Summer Walker’s coolly distingué yet proactive vocal stylings, and the dry manner in which she approached her guitar-heavy brand of alt-soul. An unusually specific storyteller with an icy delivery that would make Grace Jones sound like Little Richard in comparison, the joy of Walker songs such as “Over It” snuck up on and stuck to the listener long past the concert’s close, if attendees singing through the parking lot was any indication.

If you wanted R&B of a warmer brand, the Questlove-backed Soulquarians’ showcase – one dedicated to his longtime aggregation of musical associates from D’Angelo’s “Voodoo” album of 1999 – was home to a grouping of neo-soul’s most towering vocalists, SWV, Keyshia Cole and Philly’s own Musiq Soulchild. The latter brought the crowd to cries, oohs and ahs with every fluttering vocal run.

Along with the treasures of R&B, the wealth of jazz and gospel in varying shades that the Picnic provided in a large setting was worth the admission. Protean saxophonist Kamasi Washington and his double-drumming ensemble was a soaring, Sun Ra-like force for good grooves and ferociously free intergalactic spiritual musicality on Sunday afternoon. For all his peaceful musicality, however, Washington and Co. did not ignore the importance of social justice, as trumpeter Dontae Winslow improvised a spoken word shout about the evils of white supremacy before driving through the hardcore funk of “Fists of Fury.”

Read the full article on Variety.