Live. On stage. With audience. Opera Philadelphia’s abbreviated ‘Tosca’ at the Mann seems like old times. 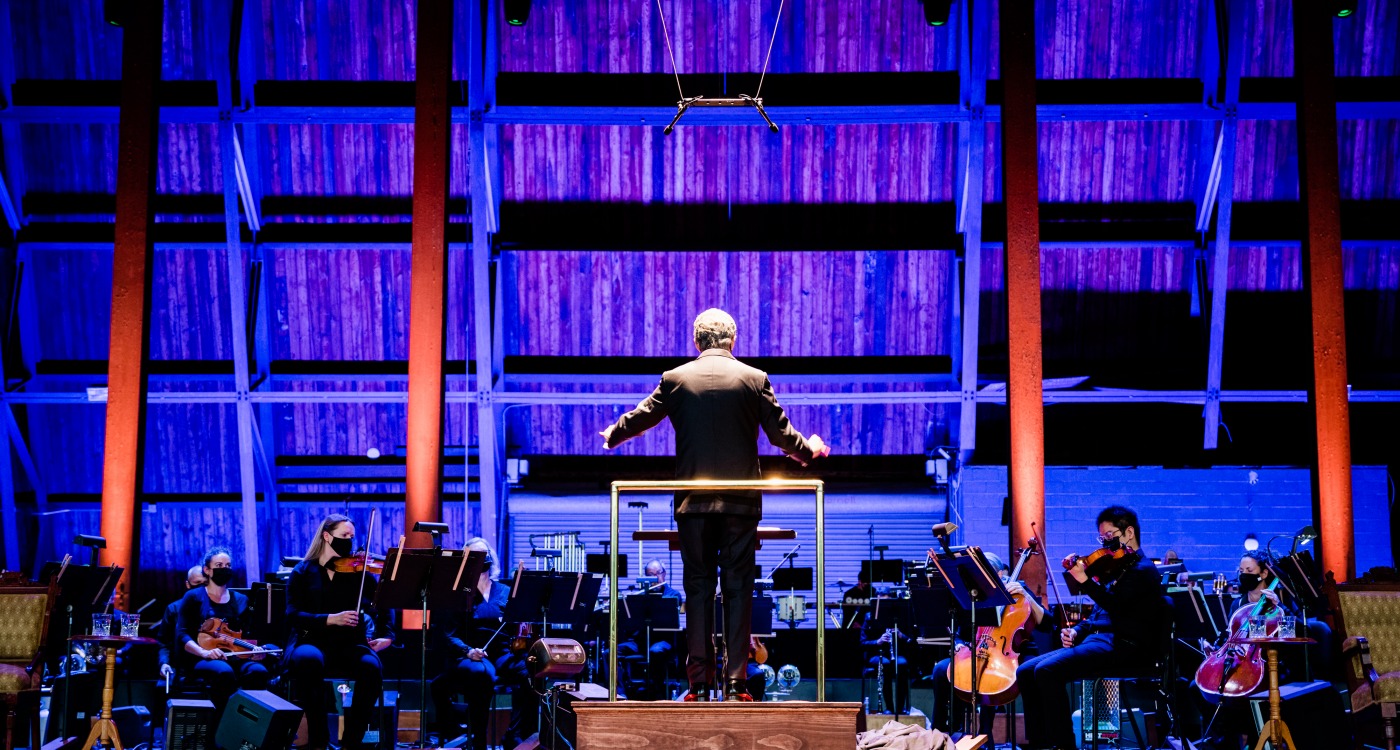 Music Director Corrado Rovaris leads the Opera Philadelphia Orchestra in "The Drama of Tosca" at the Mann Center for the Performing Arts.

Three high-voltage singers and full orchestra were on hand for a concert performance at the Mann Center on Wednesday. People dressed for the occasion, accessorized for a damp night with gloves.

“A Tosca of the moment” is how Opera Philadelphia general director David Devan termed the company’s return to live theater — with three high-voltage singers and full orchestra in an unstaged concert performance at the Mann Center on Wednesday.

It was rehearsed and performed carefully: One positive test for COVID-19 would have shut down the production, which repeats Friday and Sunday and will be streamed June 17 on the Opera Philadelphia Channel, operaphila.tv.

With only 500 well-spaced seats available inside the sprawling shed and no lawn seating, the usual outreach potential of the Mann Center was limited. Listeners dressed for opera — not in Mann casual — and the typical social bustle was muted, as it was, reportedly, when Philadelphia Chamber Music Society first welcomed back live audiences.

The stage’s atmospheric lighting lent a sense of occasion to this brave enterprise, though wet, chilly weather meant that applause from the listeners, who numbered a little less than the 500-seat capacity, was dampened by the wearing of gloves.

Realistically, any opera shoehorned into current circumstances isn’t likely to be the Tosca of your dreams. Though the collective forces under music director Corrado Rovaris were in top shape, the socially-distanced staging seemed to curtail the chemistry between Ana María Martínez (a rich-voiced, mezzo-ish Tosca), tenor Brian Jagde (a robust Cavaradossi though still getting the hang of Puccini style), and Quinn Kelsey (few Scarpias I’ve heard have sung the words so compellingly) — all making their Opera Philadelphia debuts.

Such a consistently fine lineup was unthinkable at Opera Philadelphia 20 years ago. But the necessary amplification created a distancing effect. I felt more professionalism than passion.

Under the title The Drama of Tosca, Giacomo Puccini’s tightly constructed, high-melodrama story about an opera singer bargaining for the life of her freedom-fighter lover was rearranged with ongoing commentary written by Francesco Micheli and performed by Charlotte Blake Alston.

Most secondary characters were cut, with the charming exception of the Shepherd Boy (beautifully sung by Alex Ramirez) and the chorus (which sang from the balcony). The 95-minute running time without intermission wasn’t much shorter than a traditional Tosca, in a presentation that alternately had flashes of insight (the evil Scarpia was compared to a mafia don) but also sapped the opera’s usual runaway-train momentum.

The narration’s probing intellectual manner was mismatched with an opera that has been affectionately termed “a shabby little shocker” and invites visceral experience more than contemplation. Through no fault of Alston’s highly inflected delivery, the writing came off, at various points, as arch, even condescending toward the opera’s cliches and broke the music’s carefully crafted illusion.

The ending, though, hit the right emotional notes: An impassioned advocacy of the artist’s role in our post-pandemic society was followed by the great aria “Vissi d’arte” (“I lived for art, I lived for love”) in a deeply felt performance by Martinez.

Nonetheless, one operatic neophyte left the performance asking “Just how does Tosca die?” The final scene — which is not how this presentation ended — normally has her heroically jumping off a high building, in one of the most effectively constructed climaxes in all of opera.

Even in a concert performance without the theatrics at the end, the music alone tells you what you need to feel. I hope I never become too brainy to be thrilled by it.

Tickets are available through Friday for performances at 8 p.m. Friday and 2 p.m. Sunday at the Mann Center for the Performing Arts. Price range: $75-$150. The June 17 streaming performance is on the Opera Philadelphia Channel. Information: operaphila.org.