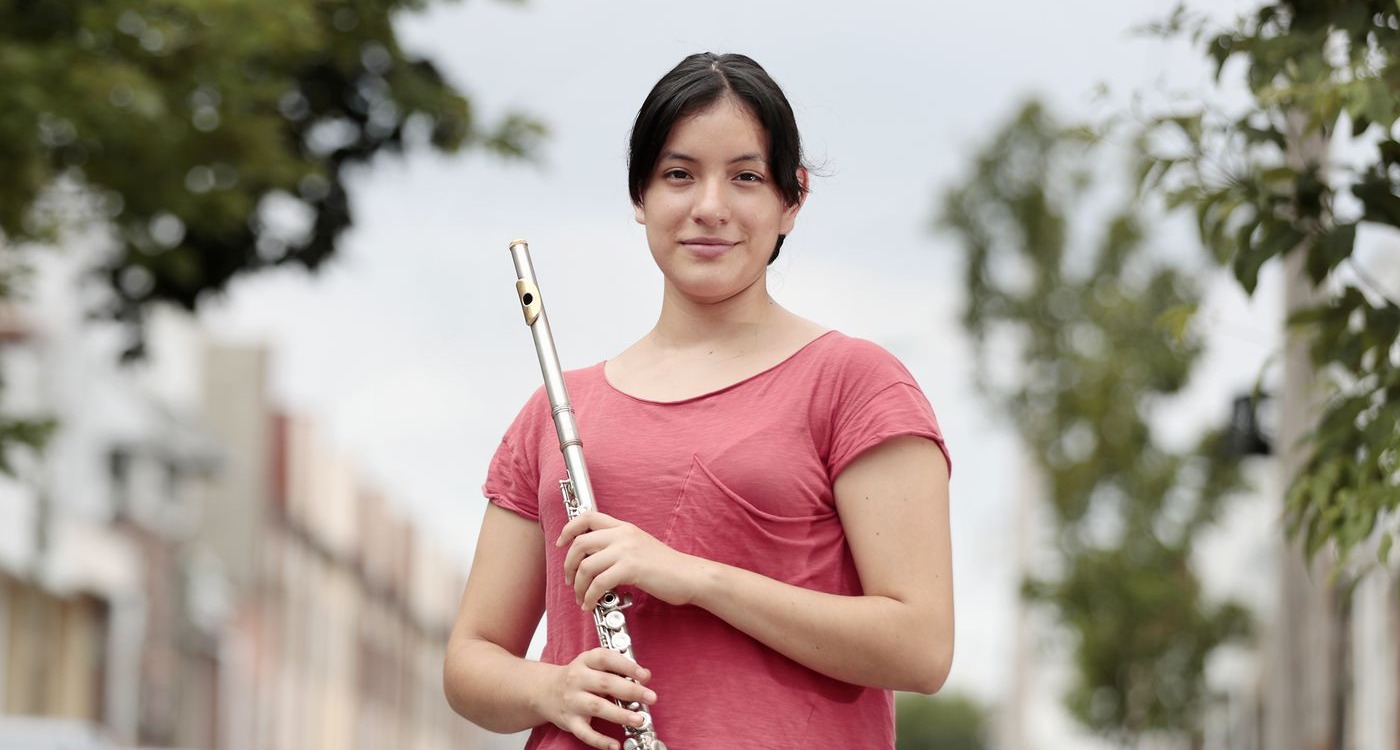 Ariadna Rosas, a student in the Mann Center's All City Orchestra Summer Academy, photographed near her home in South Philly.

You’d never guess that the 90 students and 27 faculty members at the All City Orchestra Summer Academy haven’t been in the same room. The impact of the two-week program, conducted over Zoom, is that deep.

“On the first day, we were talking about imagining colors in the music, and creating stories and characters,” said 17-year-old flutist Ariadna Rosas, who lives in South Philadelphia and is back for a second year. “I didn’t think a lot about that before. But I’m starting to put that into my practice.”

The academy’s digitally convened middle school and high school musicians studied and practiced during the last two weeks of July alongside Philadelphia School District music teachers and players from the highest reaches of the Philadelphia Orchestra. “This was no gentle nudge into the 21st century,” said orchestra bassist Joe Conyers. “This was a full-out push over the edge.”

The program’s grand finale — a student performance of the “Farandole” movement from Bizet’s L’Arlesienne Suite that goes live at 11 a.m. Aug. 11 on the Mann Center Facebook page — will have all its parts recorded individually from the young musicians’ homes and then synced together under the prerecorded video direction of Philadelphia Orchestra music director Yannick Nézet-Séguin.

Improving performance skills wasn’t the only goal here. Students were also learning how to compose their own music as a way to express their own voice. “This is an opportunity for them to tell their story in a different way,” said Naomi Gonzalez, vice president of education and community engagement at the Mann Center for the Performing Arts, where the academy began last year.

The academy is designed to help students grow not just musically but also socially and emotionally, she said, “whether they’re creating something or learning about the creative process.”

Now in its second summer, the All City Orchestra Summer Academy (ACOSA) reflects the way major performing arts institutions are pursuing more educational endeavors than ever. The project’s free-of-charge enrollment, for students ages 12 to 18, rose from 65 last year to 90 this year — out of some 120 first-come, first-served applicants. Many students come from families with an income level that qualifies them for free or reduced lunch.

The project’s circle of collaborators has also expanded. Along with original core partners from the Philadelphia Orchestra, Conyers’ Project 440 music program, and the School District of Philadelphia, it now includes the Network for New Music, WRTI radio, and others — which is possible partly because there’s no jockeying for physical space at Mann Center facilities.

Faculty includes 13 school district teachers and 14 Philadelphia Orchestra players, some of whom — like Conyers and percussionist Don Liuzzi — have ongoing commitments to young people’s musical education. Conyers calls ACOSA “a bit more introductory” in comparison to some of other youth programs in town, including the broad-reaching Project 440 he cofounded in his native Savannah, Ga., and directs in expanded form in Philadelphia. But the goals are much the same.

Like Gonzalez, he believes “music is a tool for students to learn about the world.” But he and others at ACOSA also talk about cultivating the mind-body connection that comes with music. To that end, the summer’s academy included daily online yoga classes. (The most frequent post-yoga comment in the Zoom chat box: “I’m hungry!”)