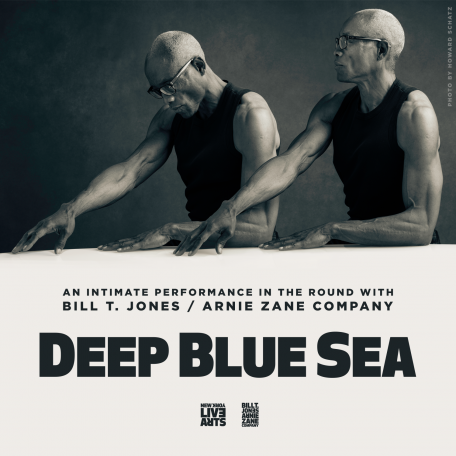 The Pew Center for Arts & Heritage and the William Penn Foundation

This performance has been postponed to our 2021 Season. Dates TBD. All tickets will be honored on future performance dates.

Deep Blue Sea will be an immersive arts experience that explores the relationships between the individual and the larger community, as well as performer and audience. Directed and choreographed by Tony-Award winning Bill T. Jones, Deep Blue Sea unfolds in three sections: a solo by Jones deconstructing text from Martin Luther King, Jr.’s landmark “I Have a Dream” speech, which evolves over time into the 10-member Bill T. Jones/Arnie Zane Company, that further expands into an expansive collaboration with local Philadelphia participants.

The work will explore the manipulation of text, spoken word, and singing as part of an ever-present sound score composed by Nick Hallett in collaboration with Music Producer HPrizm aka High Priest. Creating the physical environment is architectural team Diller Scofidio + Renfro and Project Designer Peter Nigrini, with lighting by Designer Robert Wierzel and costumes by Liz Prince.

A key component of this work is the exploration of community, driven by the concept of self-identity within the elusive group. Deep Blue Sea will be created around a diverse group of 60 community members, who will work with the company over a six-month period through a series of residencies. The Company will work with community participants through layers of dialogue, movement exploration, and community building, resulting in a truly Philadelphia-centric performance that reflects the diversity of the communities present.

Major support for Deep Blue Sea has been provided by The Pew Center for Arts & Heritage.

Major support has also been provided by the William Penn Foundation.

Additional support made possible by the New England Foundation for the Arts’ National Dance Project, with lead funding from the Doris Duke Charitable Foundation and The Andrew W. Mellon Foundation.

This project is supported in part by an award from the National Endowment for the Arts.

Downstage @ the Mann is made possible by The Presser Foundation.