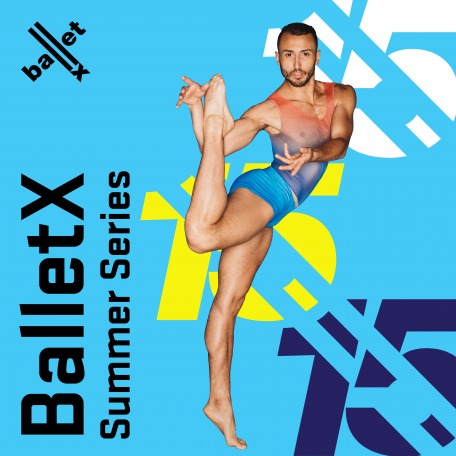 BalletX, whose dancers were named “among America’s best” by The New York Times, commissions choreographers from around the world to create dance that is “fresh, inclusive, and connects to what people want” (Philadelphia Citizen) while “positioning Philadelphia on the cutting edge of contemporary ballet” (The Dance Journal).

Hope Boykin · World Premiere
Hope Boykin, who The New York Times describes as a “poetic force” who “radiates power in her fearless, generous dancing,” was a former dancer with Philadanco and a 20-year company member with Alvin Ailey American Dance Theater until her retirement in 2020. Boykin makes her BalletX debut with a world premiere set to original music by composer Ali Jackson, master musician and former Drum Chair of Jazz at Lincoln Center Orchestra. Her new work, entitled IN The Distance, is not where the journey ends, but simply another starting point – a place for us all to begin… again.

Matthew Neenan · World Premiere
Matthew Neenan, co-Founder of BalletX and “one of America’s best dance poets,” according to The New York Times, has choreographed on New York City Ballet, Pennsylvania Ballet, Pacific Northwest Ballet, and Washington Ballet, among countless others. Neenan’s work has been hailed by The Philadelphia Inquirer for its “tremendous power, grace, and style.” He returns to BalletX with a world premiere set to the music of legendary composer Stephen Sondheim, including Finishing the Hat arranged by Steve Reich and That Old Piano Roll arranged by Wynton Marsalis.

Dwight Rhoden · World Premiere
Dwight Rhoden is the acclaimed Founding Artistic Director and Resident Choreographer of Complexions Contemporary Ballet, who has been praised by The New York Times as “one of the most sought out choreographers of the day.” Rhoden has created over 80 ballets for Complexions, as well as Alvin Ailey American Dance Theater, Joffrey Ballet, San Francisco Ballet, and many more. His new work challenges the BalletX dancers to deconstruct and reimagine classical movement to spotlight the grit and grace that our relationships must endure during challenging times.

BalletX Summer Series is presented with lead support from the Alphadyne Foundation, William Penn Foundation, Wyncote Foundation, and J. Watkins Fund for the Arts and Education.

Tickets are on sale now via Ticketmaster.com or the Mann Box Office.

Safety precautions include enhanced cleaning, sanitizing stations, and mobile tickets. PLEASE NOTE: Concessions will not be open for this series. Picnics are welcome!