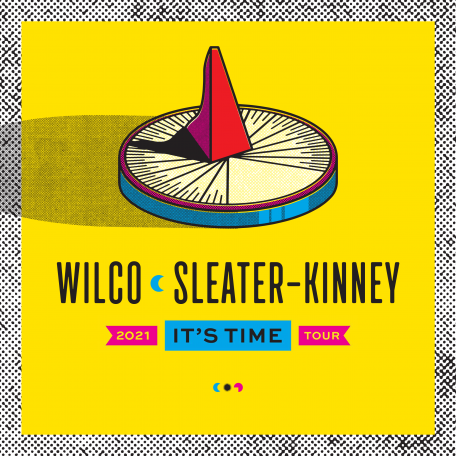 Event Update: This event has been rescheduled and will now take place on August 22, 2021. Hold on to your tickets! All tickets will be honored for the rescheduled date. For any further ticket inquiries, please reach out to your point of purchase.

Wilco and Sleater-Kinney on tour together? It's Time. A summer show you don't want to miss. Catch the combo at the Mann on August 23.

Throughout the past two-plus decades, Wilco has won multiple GRAMMY Awards and released ten studio albums, as well as a trio of albums with Billy Bragg penning music to lyrics by Woody Guthrie. They founded their own record label (dBpm Records) and festival (Solid Sound), and 2020 saw them curate Sky Blue Sky, a destination concert experience in Mexico for the first time. The Chicago sextet continues to be regarded as a live powerhouse, as described by NPR: “To see Wilco on stage is to hear the best of the best.” The band’s new album, Ode To Joy, was released in Fall 2019.

“How does brokenness walk? Or move through the world?” says guitarist/vocalist Carrie Brownstein about The Center Won’t Hold, Sleater-Kinney’s tenth studio album. “We’re always mixing the personal and the political but on this record, despite obviously thinking so much about politics, we were really thinking about the person – ourselves or versions of ourselves or iterations of depression or loneliness – in the middle of the chaos.”

The Center Won’t Hold is Sleater-Kinney’s midnight record on the doomsday clock. After twenty-five years of legendary collaboration, rock 'n' roll giants Carrie Brownstein and Corin Tucker rise to meet the moment by digging deeper and sounding bigger than we’ve heard them yet. Here are intimate battle cries. Here are shattered songs for the shattered survivors. “The Center Won’t Hold drops you into the world of catastrophe that touches on the election,” says guitarist/vocalist Tucker of the title track. “We’re not taking it easy on the audience. That song is meant to be really heavy and dark. And almost like a mission statement, at the end of that song, it’s like we’re finding our way out of that space by becoming a rock band.”