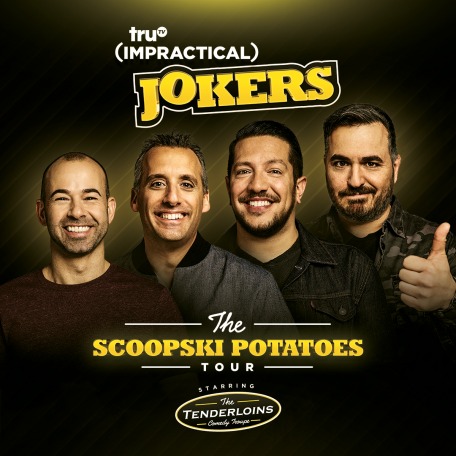 the Mann, Live Nation, and Preston & Steve from WMMR

*Note: This show is suggested for ages 16+. Parental discretion is advised.

The Tenderloins, creators and stars of truTV’s hit show Impractical Jokers, are bringing “The Scoopski Potatoes Tour” to Philadelphia in Summer 2020! Off the heels of the Season 2 renewal of their new game show “The Misery Index,” the Season 9 pickup of Impractical Jokers, and their sold-out global tour “Cranjis McBasketball Word Comedy Tour,” The Tenderloins are excited to bring new videos and jokes to comedy fans across the nation. James “Murr” Murray, Brian “Q” Quinn, Joe Gatto, and Sal Vulcano have been making audiences laugh on Impractical Jokers since 2011, and will reach a 200 episode milestone in February 2020. Impractical Jokers is a top 5 comedy on cable, and truTV’s longest-running & top-rated original comedy. Don't miss this hilarious show at the Mann on Friday, August 14!