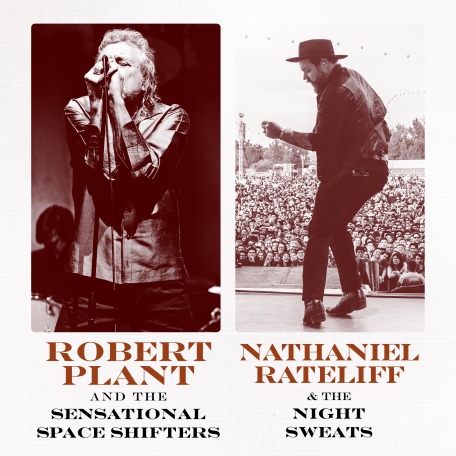 Robert Plant and The Sensational Space Shifters and Nathaniel Rateliff & The Night Sweats are together in concert and at the Mann for one night only on September 17.

On his second Nonesuch Records album, Carry Fire, Plant reflects on the experiences, the emotions, and the sounds of where he’s been, and he ruminates on where he—and our world—might be headed. Bittersweet songs of love remembered and of time passing are juxtaposed against cautionary tales, of people and nations that have failed to learn the familiar lessons of history.

Tearing at the Seams, the second album from Nathaniel Rateliff & The Night Sweats, is a vivacious and inventive full-band record, with significant contributions from all eight members of The Night Sweats. These songs are grounded in old-school soul and R&B, but are far too urgent for the retro or revivalist tag. There are familiar elements of soul and garage rock, but also jazz and folk and even country: the crackling energy on opener “Shoe Boot,” the cathartic sing-along of “Coolin’ Out,” the melancholy folk of the closing title track. “The future of this band is to take everything we’ve ever done in the past and just do it with our own little twist,” says Rateliff. “I hear that in my favorite bands. They just sucked everything up.”