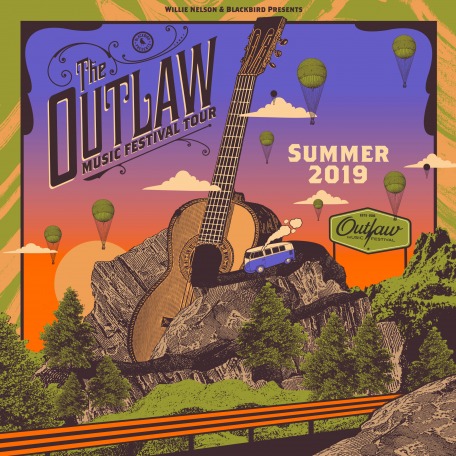 “The second leg of the Outlaw Music Festival Tour with all my friends is going to be a blast,” says Willie Nelson. “We’ll see you out there this summer!”

“Family. That’s what this touring group of artists, fans, and friends are when we come together for our annual Outlaw Music Festival Tour. We are thrilled to announce the second leg with Willie and this extraordinary group of artists,” says Keith Wortman, CEO of Blackbird Presents.

The inaugural Outlaw Music Festival made its debut in 2016 in Scranton, PA featuring Willie Nelson & Family, Neil Young & Promise of the Real, Sheryl Crow, Chris Robinson Brotherhood, Lee Ann Womack, and others. The sold-out show was so well-received that Blackbird and Nelson decided to take their band of outlaws on the road as a touring festival in both 2017 and 2018. Last year, the Outlaw Tour hosted more than 200,000 fans in amphitheaters and arenas all over the country. From Willie Nelson to Neil Young to Bob Dylan to Van Morrison to Alison Krauss to Sheryl Crow to Sturgill Simpson to Margo Price, fans have shared unforgettable music memories and enjoyed unique vendor villages with local food, drinks, and shopping.